Whispers was designed as a framework to offer outstanding inspirational and educational experiences to a diverse group of young people drawn from NHMS (Saturday Morning Music School & established ensembles) and local schools including The Priory School, Hitchin Girls School, Hitchin Boys School and Knights Templar School. Between May – November 2018, the young team received mentoring, training and guidance from outstanding industry specialists enabling them create and deliver Highbury Whispers. Six public performances were given on 9th and 10th of November with a private preview (dress rehearsal) on 8th November.

Highbury Whispers was developed as part of the Hansel & Gretel storytelling outreach programme (March-November 2018) Through an extensive range of activities developed with parters,  Storytelling was used as a bridge-building concept and a creative starting point, giving voice to young people to tell stories in their own way. Through workshops and events we empowered young people through decision making, by putting them at the heart of the creative process and enabling them to produce vibrant and innovative work.

Highbury Whispers is ‘site-specific’: in other words, the show has grown from the rooms, history, architecture and acoustics of Highbury House. The house IS the theatre and we have dressed it accordingly, attempting to bring back some of the splendor, intimacy and warmth of this lovely building whilst making many references to its contemporary use as a school. Scenes take place around the house and outside, using the spaces to draw audiences deep into the story.

We like to call our production ‘historically aware’ or ‘historically influenced’. The real history of Highbury House is tied up with the beginnings of the Rural Music Service; it covers the period of two world wars and the suffragette movement. We have taken fragments of history and sprinkled them liberally around our story, woven together with a great deal of imagination. The real life Frederick Seebohm was a banker and historian who funded and supported much of the early Rural Music Service in North Herts. His wife was called Mary. In our story they have a daughter   – Charlotte Seebohm – but the real Frederick and Mary had a son called Hugh (a director for Barclays bank) who was the first treasurer of the Rural Music Service. Frederick did actually not live at Highbury House – he lived in a grand house called The Hermitage (86a) on Hermitage Road. The Rural Music School were offered a small room in this house to use as an office (c. 1929)

The characters Harriet Ibberson and Charlotte Seebohm are inspired by Mary Ibberson (a good pianist) and Edith Grubb (a professional cellist) who founded the Rural Music Service in the late 1920s and 1930s. Mary Ibberson was born c. 1880 and her family settled in Letchworth in 1913. Edith, Mary and friends played chamber music together and gave monthly concerts. A ‘varied music department’ developed from these early days with ‘a choir, a string orchestra, country dancing and courses in musical appreciation’. The students formed a club and organised trips to see concerts in London. Hugely ambitious, incredibly capable and dedicated, they put on an opera (Purcell’s Dido & Aeneas) in the St Christopher Theatre in Letchworth. They also started to take their classes out in to the villages (Weston was the first) and the Hertfordshire Rural Music School grew from this. It was founded in order to be able to deliver music lesson to everyone who wanted them in the area.

The schoolgirl character Edith Cross is based on the real life ‘school girl suffragette’ Ellen Cross. Ellen was born in 1892 and met Emily Davison as a young girl, altering the course of her life. In Highbury Whispers, her (fictitious) daughter Edith enters the narrative in scene 5 (1935), telling the story of her mother (Ellen) who has become a role model for the boarding school girls. We are very grateful to the North Hertfordshire Museum for sharing this historical ‘real life’ story with us.

Highbury House was actually used as a boarding school from 1952-59 but to our knowledge there have been no fires ….or ghosts…..

What did our audiences think of the show?

‘What a brilliant production – Incredible performance from everyone involved on & off stage, bringing to life Highbury House & its memories. Poignant, moving, fitting WW1 tribute and such talent from the kids who created the whole thing’. Samantha Martin (Arts Council England)

‘Thank you for the most interesting and professional performance. The children have worked so hard and deserve great praise; hope to see another performance in the future.’ Cllr Jean Green  (Vice Chair North Herts District Council)

‘Very moving, the house made a brilliant backdrop to your fantastic tale.’ Mayor of Stevenage

‘What a fabulous show; the powerful feelings shown by the students passed on to us – very emotive! It’s not fair to pick anyone out because all the students were excellent – wow!’ Andrew Bullen

‘What a show that was! I cried and laughed, my heart was full of joy! An incredible experience, thank you, you deserve a big round of applause! In absolute awe of this beautiful company and what I’ve witnessed today!’ (audience member)

‘An absolutely incredible show. Fabulous music, storytelling and performances. A massive well done to the cast, crew and a huge thanks to everyone involved.’ (audience member)

What did our Young Production Team think of the project?

‘It was a real community – completely made by us!’

‘We had complete freedom with the project and  nothing felt impossible’

‘People trusted me to bring my ideas to life’

‘Because I was working with other people and after a while I realised we all have our opinions so why not say them? It pushed me to express myself because it wouldn’t be worth it if I didn’t.’

‘It was such a supporting and creatively challenging project and allowed many to feel free to be themselves and develop confidence in their own ability’.

‘I enjoyed working with adults as well as children. I liked making friends with people across Hertfordshire. I was very proud of the show and loved how professional it felt’.

‘Whispers is like nothing I have ever done before. It gave me such a unique opportunity in which the cast and mentors were brimming with support and enthusiasm. I have made new friends, which was a really unexpected outcome for me and was not one of my aims when joining the project. I would change nothing about it and had an absolute whale of a time’.

‘I loved it all! Can’t fault anything at all! Even though there were challenges but they were what made it more fun and made us more proud of the final show’

‘Before Whispers, I didn’t think I had the talent in me for performing! Now I really want to do drama for GCSEs’

‘My confidence had definitely improved, also I can now work better in groups’

The Creative Team - our Youth Production Team and Mentors

Young people have brilliant imaginations. They make up stories, music and dance. They design unexpected, beautiful and functional things. They are resourceful and they find surprising and creative solutions to problems. They can work alone and as teams and they approach all this with a wonderful spontaneous sense of play and freedom.

Highbury Whispers was a ground-breaking pilot project entirely founded upon the belief in the capabilities and creativity of young people. Devised by Goldfield Productions and the North Herts Music School, we thought..…what if we gave young people a space, support and a framework? Could a large group of children, coming together for the first time, create a piece of musical theatre from scratch in six months? Well, they could and they did.

When we first met in May 2018, all we had was a building (Highbury House). There was no script, no songs, no cast, no story, no costumes. Over a series of workshops (‘How does a production company work?’) our young people have discovered the roles that they wanted to take on and used their imagination, skills, talent and resourcefulness to create a new musical that – truthfully – exceeded all our expectations.

Some of our young people stepped out of their comfort zones from the start, attracted to the project by the chance to try something new. Others took time to develop existing skills in different ways. Almost everyone has a multiple role (often ‘on stage’ and back-stage too). Its been particularly striking how many have grown into roles they did not originally consider, willingly stepping up, saying ‘I can do that’.

They have been supported by a group of outstanding industry mentors who have come into the project at various points and shared what they know- never dictating, but working alongside the young team and showing them how professionals go about creating a show. Our mentors include international opera and theatre director Caroline Clegg, leading dance practitioner Jane Turner, Rachel Willis from Let’s Go Sewing, lighting expert Georgie Ekers, percussionist Caz Wolfson, make up from Dimitra Zenetzi and set design from Andy Lawrence (Theatre of Widdershins). We are very grateful to Rachel Thomas, Rowena Thompson and Bridget Caldecote for additional music coaching.

Best of all, these young people worked as a huge cohesive team. They are a supportive, hard-working, quick-thinking, kind and thoughtful community and its impossible to express just how much we have enjoyed working with them. All the mentors, Nicky Footer and I are proud of every single one of them and the essential parts they have played in bringing Highbury Whispers to life. They have demonstrated beyond doubt that what young people need to produce outstanding creative work is support, time, encouragement and a ‘playground’ in which to let their imaginations run free – they will do the rest.

The project could not have taken place without the invaluable support of Nick Denham (Head of Participation and Inclusion officer for Hertfordshire Music Service), Liam Amner and Bethany Barnett-Sanders (North Herts Music School administrator)

Hitchin Girls’ School – for allowing us to transform beautiful Highbury House into a theatre!

Our larger set items are on hire from Recover, a vibrant upcycling social enterprise based in Welwyn who create pathways into volunteering and work. At its heart is a commitment to sustainability by upcycling old unwanted furniture or working with donated or reclaimed local materials. RECOVER offers vulnerable adults new fulfillment and purpose.

We are extremely grateful for additional funding support from: 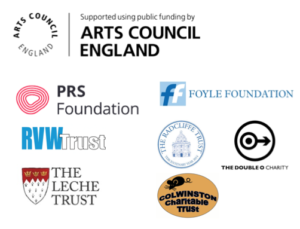